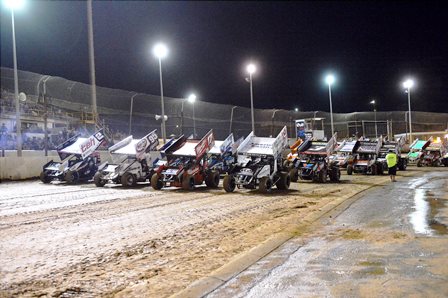 This season’s payouts for each round of the Sprintcar Track Championship at the Make Smoking History Bunbury Speedway has had an added boost for all drivers.

For the November 9 and January 1 shows at the South West venue, the total prize fund will now be increased for the drivers with a cool $5000 winners cheque going to the A-Main winner. Giving drivers and teams based in the metropolitan region a good reason to make the trek down the Forrest Highway.

The event payout has been increased largely from the total prize fund last season, and with rising costs to run and maintain these beasts of machinery, it will hopefully make the decision easier for drivers to compete on these events. Events co-ordinator Andrew Roberts was adamant that the “teams come first” approach was paramount to attract numbers to the venue for the season ahead.

“Making these shows a minimum $5000 to win will only help the teams and give them added incentive to come to Bunbury,” he said. “With the added incentive of our Track Championship for a prize pool at the end of the season, it will only serve the teams better for this year.”

Sprintcars will kick off their Bunbury season in style next weekend with the Auto One Sprintcar Grand Slam, the third round of the Maddington Toyota Sprintcar Series with Late Models, Wingless Sprints and a $1500 prize pool for Street Stocks all on the scene for what will no doubt be a massive event

James McFadden and Monte Motorsport are the Krikke Boys champions for 2019
A POSSIBLE MCHUGH MASTERCLASS?