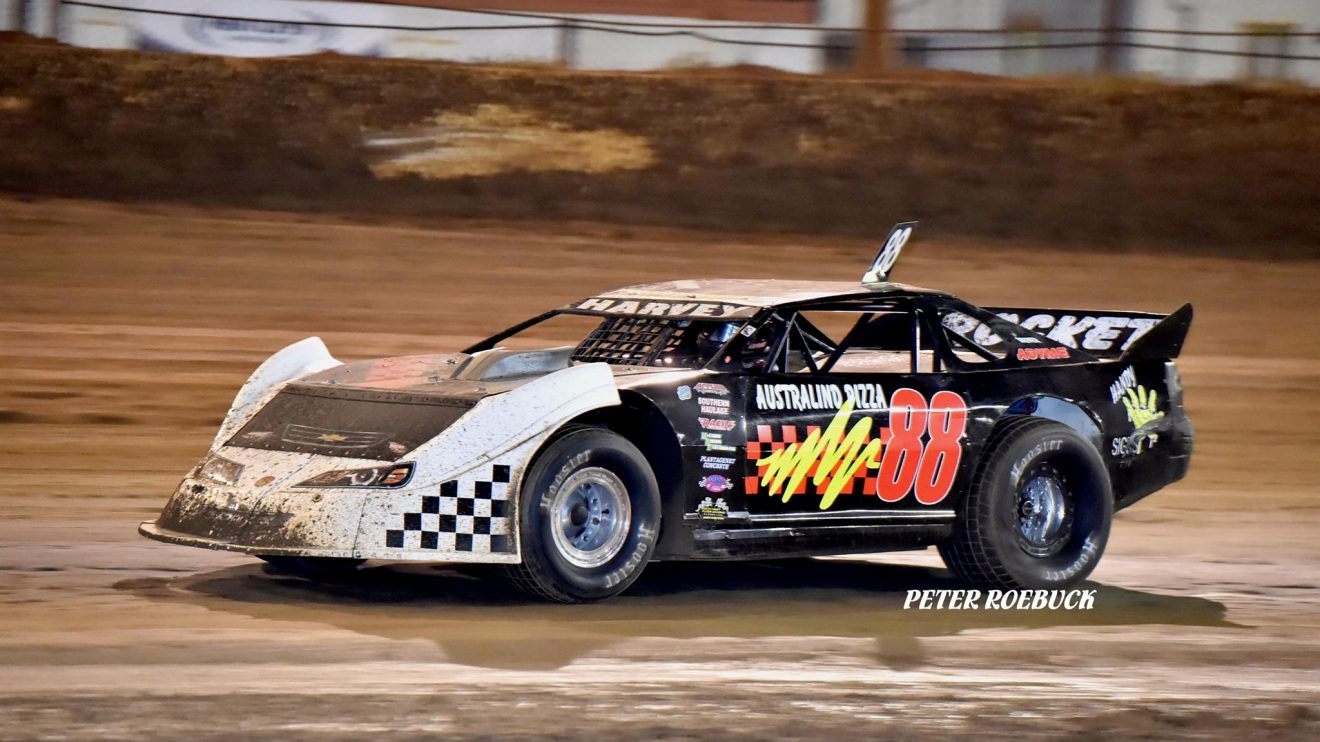 The day started off on a rough note for the Super Sedans, with Adrian Geary, who had earlier been awarded the Best Presented Car trophy (across all divisions) blowing a motor in the first corner while Glenn Smith caught on fire to also end his night early. A number of other restarts also saw the Chief Steward lose patience and send the field back to the pits, declaring a no race.

From here though things improved, with Kevin Bell winning two heats and Darren Ahearn the other. Courtesy of no points being awarded for the first race, Adyme Harvey was elevated to the pole position start alongside Bell, while the second row was comprised of Ahearn and WA Champion Warren Minshull.

The feature event got underway and it was Bell who raced into the lead over Harvey as Minshull desperately sat on their tails and tried to make his way through.

Harvey too was applying the blow torch to Bell and he hunted for a gap, the top three pulling away slightly and beginning what would be an epic battle that had fans on the edge of their seats.

On lap five Bell made a slight mistake that allowed a gap to form and ‘Animal’ pounced, grabbing the lead. One lap later the yellow lights came out as Damo Wallinger found himself stranded.

Harvey led away the field on the restart, with Bell, Minshull and Ahearn line astern and hungry to advance, but it wouldn’t be until lap ten there was any change despite side by side racing, with Ahearn making the move on Minshull for third.

Minshull retook the position three laps later and looked destined to settle for third until disaster struck with the chequers in sight, Kevin Bell slowing, heading infield at a rate of knots, smoking heavily and then catching fire in what was an epic conclusion to the 50th Anniversary Show. As officials removed the threat from Bell’s car the chequers were already on display, Harvey going on to record a strong win from Minshull and Ahearn. Tristan Green was fourth while Steve Larson, Terry Green and Andrew Kennedy rounded out the finishers.

A big thankyou to all the Super Sedan drivers who took the time out to compete last night and for being part of the 50th Anniversary show celebrations.