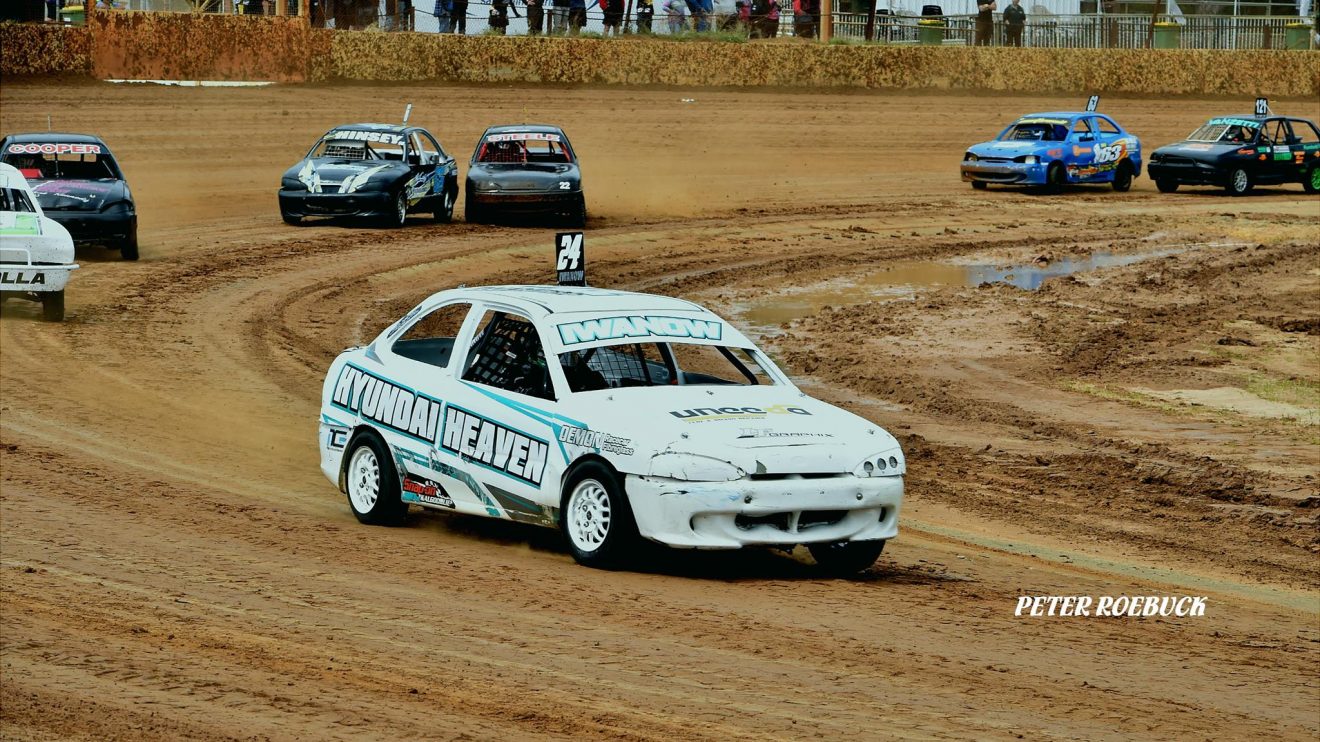 Courtesy of his three heat wins, Iwanow would start from pole position alongside Darryl George who continued his own recent good form to claim two heat wins and a third. Seth Hinsey claimed two wins and would start from third place while State Champion Todd Atkins, the only interstate driver in the field, claimed one heat win and started from fourth.

Iwanow shot away immediately as the green flag flew, with George in hot pursuit while behind them Atkins and Hinsey would swap positions a number of times.

Atkins got past Hinsey and then set out after George but unfortunately the duo would come together, seeing Atkins lucky not to t bone the wall while George was sent to the rear on the restart.

A lap later the yellows were out again, this time with a couple of cars making contact and Kayne Dellar going infield, Brody Day going high and hitting the turn four wall and Kurtis Blackburn all unable to continue with four laps on the clock in a number of incidents.

Iwanow would lead away Atkins and Tyler Fraser and set the fastest lap of the race, then the yellows came out once again, with Taj Vanzetti, Jesse Steele and Jhy Pack all ending up on the infield as a shower fell on the track, making it quite slippery. After a number of rolling laps under yellow, the race was able to get underway once again, with Iwanow again leading away Atkins and Hinsey while Blake Webb had worked his way into fourth.

All of a sudden Atkins headed infield and the makeup of the race changed again, Iwanow still leading but Hinsey now in second ahead of Webb, Fraser, Ethan Cooper and Bryden Southwell who was on the charge from position sixteen.

Webb grabbed second from Hinsey on lap thirteen as Cooper headed infield, and Southwell was in position four on lap fifteen, then grabbed third from Hinsey on lap eighteen before the yellows came out on final time, setting up a green, white, chequer finish.

Iwanow held strong on the restart while Hinsey went wide looking for a way through that didn’t come off, seeing Fraser and Kayne Dellar able to skip through with one lap remaining. Iwanow would go on to win by 1.6 seconds over a fast finishing Webb, while Southwell finished his charge in third place. Tyler Fraser and Kayne Dellar rounded out the top five positions.

Earlier in the day, Heat wins were shared by Iwanow (3), George (2), Hinsey (2), Atkins and Brody Day, while Matthew Thomson would win the consolation race.

Last night would also double as round two of the JSRA Metro Series, so a huge thanks to the JSRA and the Junior Sedan drivers (and their families!) for working with us to put on such an incredible event for their series and the SSA 50th Anniversary event combined.

Sayer Smoke’s Em
Oldfield Still The One To Beat