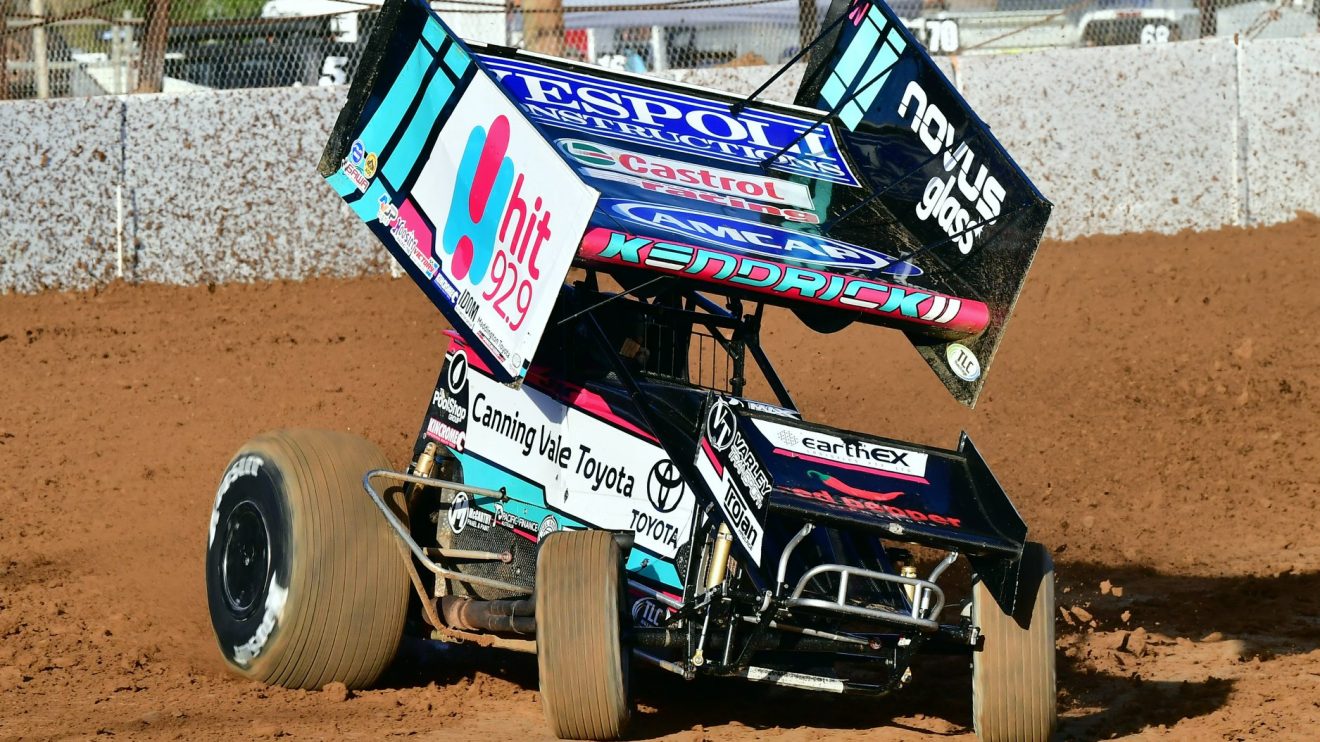 THREE rounds into the Maddington Toyota Sprintcar Series and we have three different round winners – with Jason Kendrick winning the Auto One Sprintcar Grand Slam at Bunbury Speedway on Saturday night from Daniel Harding and Andrew Priolo.

Kendrick started on the inside of the front row for the 30-lap feature race and got the jump on fellow front-row starter Ben Ellement and never looked back.

It was a solid result from Kendrick who was second quickest in qualifying and took a win and a third (from seventh) in his heat races.

It was the hit92.9 Kendrick Racing Team’s best result of the season so far – on the back of a pair of fourths in the first two rounds.

Ben Butcher was due to start from P14 for the main event but was a scratching after suffering major engine damage in the second round of heats.

Jamie Oldfield, who was due to start from P10, pulled infield in the warm-up laps, with fuel line issues, with Daniel Hartigan also heading infield, relinquishing his P11 start.

Ellement and Queenslander Lachlan McHugh were chasing Kendrick early in the feature but McHugh, who started from P3, had dropped back a couple of spots not long afterwards

Ellement was pushing hard and was one of main drivers to get plenty of grip from the track, pulling wheelstands on the main straight.

Ten laps were in the books when Kendrick was into lapping traffic and had a moment when Aldo De Paoli spun in front of him.

Williamson and McHugh were pushing hard for third and ultimately it ended up being a little too hard when McHugh went down the inside when approaching pits bend, with contact between the two seeing the #60 flipping hard and Williamson’s #3 also sustaining too much damage to resume.

This elevated Harding, who started from P7 into third but as the field regrouped with 18 laps remaining, he was moved up to second with Ellement going infield with engine issues.

Harding and Priolo had a moment where they traded spots with about 14 laps to go, but ultimately Harding held on for his second podium in two shows – on the back of his win the previous weekend.

Jason Pryde, who started the night off in the best possible fashion by setting the Victory 1 Performance Quick Time, clouted the main straight fence with eight laps remaining, but he was able to keep the JPM #14 rolling around, despite a deflated front right tyre.

In the end Kendrick was almost half a lap clear, taking the win by 7.9 seconds.

Priolo, who started P5, took home third in his second outing of the season and his first podium result while campaigning the number 8 that was previously used by his dad Pino and brother David, making the switch from #10.

Kris Coyle took fourth after starting from P8, a good result that was boosted by him being one of four drivers to play their Joker card on the night – doubling their feature race points.

Pryde also played his Joker, along with Williamson and Hartigan who were non-finishers.

Mitchell Wormall, Todd Davies and Pryde were the only other finishers.

Coyle was also the weekly winner of the Hoosier right rear tyre draw.

The fourth round of the Maddington Toyota Sprintcar Series will be held at the Perth Motorplex next Saturday night, being the 38th Annual Scardifields Smash Repairs King of Wings.