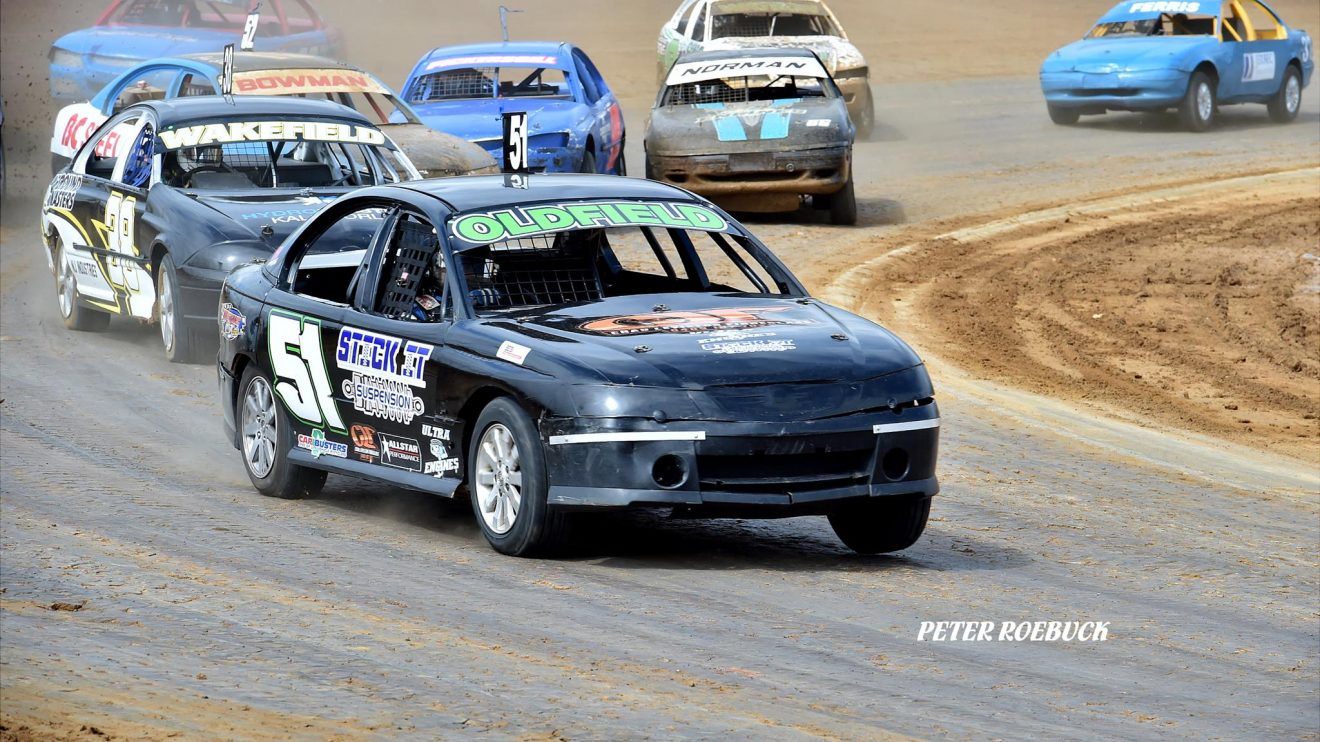 Jamie Oldfield showed why he is still one of the best Speedway Sedan racers in Australia last night in the SSA 50th Anniversary show at Make Smoking History Bunbury Speedway, claiming the Street Stock feature win in dominant fashion.

It was an all Oldfield front row for the twenty lap feature event, Jamie starting from pole alongside brother Warren Oldfield with both having claimed two wins and a second, their points only separated by times. Cody Avins put in an epic performance to start from position three while former National Champion Mick Hamon would come from position four.

As the race went green Jamie Oldfield would lead away Warren Oldfield, but all eyes were on Driver of the Year Bob Wakefield and former State Champion Wayne Thomson: Wakefield from position seven shot into third on the opening lap behind Avins as Warren Oldfield dropped back through the field, while Thomson worked the highline to perfection, coming from position fourteen to round up almost the entire field on the outside.

Thomson was sixth on the opening lap, third on the second lap and was pressuring Avins for second, getting the nose in front on a number of occasions. Wakefield though would fight back and pass Thomson on the inside on lap three.

As the drivers settled into a rhythm, Jamie Oldfield led Avins, Wakefield, Thomson, Warren Oldfield and Hamon in the opening laps, Wakefield making the move to grab second on lap five before the yellows came out a lap later for Freddy Kinsella who found himself facing the wrong way.

Hamon made his move on the restart, grabbing third from Avins while Warren Oldfield would pass Thomson a lap later for fifth as he set about mounting a charge back to the front. Oldfield then swept by Avins for fourth and set about closing the gap on Hamon who in turn was desperately trying to chase down Bob Wakefield in second and Jamie Oldfield in the lead.

On lap eleven veteran Wakefield finally succumbed to Hamon while Avins would also pass Warren Oldfield again to regain fourth place. Unfortunately for Avins it didn’t last, Oldfield taking the position back and Avins eventually being forced to retire to the infield after spinning with Ben Norman.

Warren Oldfield passed Wakefield for third on lap fourteen, then with the yellow light on lap sixteen for Avins and Norman, a four lap dash to the finish between Hamon and Warren Oldfield was set up.

Bob Wakefield was fourth in one of his strongest performances in recent years while Peter Herbert rounded out the top five. State Champion Hayden Norman was sixth while Ethan Genev was seventh in an impressive performance after starting from the rear all day in a borrowed car. Jeff Rogers, James Westerman and Clint Hadley rounded out the top ten.

Six drivers claimed heat wins across the day, with both Oldfield brothers and Hamon claiming two each while Avins, Ben Norman and Damon Thomson each claimed one win. The consolation race was taken out by Barry Hunter who turned back the clock to claim a strong win.

Thankyou to all thirty three Street Stock drivers who presented for the event and put on a great show, we appreciate you all being part of the SSA 50th Anniversary event.