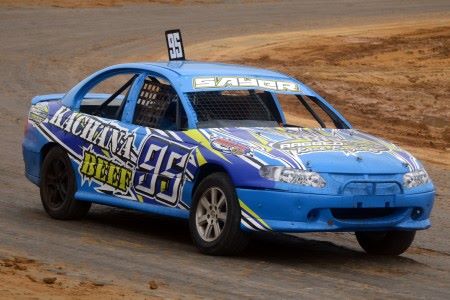 Last night at the Make Smoking History Bunbury Speedway, Kyle Sayer swept all before him in the non-stop twenty lap Production Sedan feature celebrating fifty years of the SSA.

Sayer was strong through the night, recording two seconds and a third in the heats against forty other cars to start from position five in the feature alongside WA Street Stock Champion Hayden Norman who was doing double duty.

Jamie Oldfield, who was also doing double duty and had just started from pole and won the Street Stock feature, would also start from pole in the Production Sedan feature courtesy of two wins and a second, while Collie local Beau Riley would join him on the front row with a win and two seconds. Young star Jayke Malcolm and State Champion Barry Rose would start from row two.

Just prior to the feature race getting underway, a significant shower of rain fell, dampening the track and seeing stewards left with no option but to allow cars to wheel pack for a number of laps before starting single file.

Oldfield would lead the field away followed by Riley, but the wet conditions would quickly see both slip back through the field as Sayer and Norman from the third row relished the moisture and raced through to be in the first two positions at the completion of the opening lap. Rose would slot into third while Jake Blight came from the fourth row to be in fourth.

Blight would be the big mover, racing into second place on lap three, while behind him Jason Oldfield starting from the final row, would race into seventh place, cheekily passing brother Jamie on lap four. Jamie was having none of it, seeing the little red Sigma appeared to fire him up and he began to work his way back up to the pointy end.

Back up front though it was all Sayer, lapping traffic on lap six and building up the lead on Blight who was pursued by Norman, Rose and Jamie Oldfield. Beau Riley headed infield around this time ending his strong run, while around him the race continued, all drivers managing the tricky conditions well.

Barry Rose would become the next retiree after battling a flat right rear tyre for a number of laps and dropping back through the field, while Jason Oldfield would join him on the infield a lap later, with just four retirees for the whole race.

By lap ten Sayer had lapped tenth place, seventh place on lap fourteen and fifth place on lap sixteen. As the laps wound down no one had anything for Sayer, who sat right on Jamie Oldfield tail and was looking to lap him in the dying stages, going on to win by eleven seconds flat over Jake Blight in a race that went green to chequers despite the tricky conditions. Hayden Norman held on for third while Jamie Oldfield was fourth and the final car on the lead lap.

The level of competition throughout the night was outstanding, with eight drivers claiming a win across the twelve heats. Graeme Riley also turned back the clocks and claimed the win in the consolation race.

The hard luck stories of the night also came thick and fast, with Murray Wells making a return to competition in WA in a brand new car only to be buried in the turn one wall in the opening heat, while Kane McDiarmid also went high in turn one, clouting the wall and rolling over, ending his night early despite still having enough points to qualify for the feature event. Rick Musarra also suffered damage that saw him withdraw from the feature before it even started while Tim Green and Frank Does both elected not to start.

It was a massive night for all forty Production Sedans on hand and we congratulate them all on their efforts and thank them for being part of the 50th Anniversary of SSA celebrations.