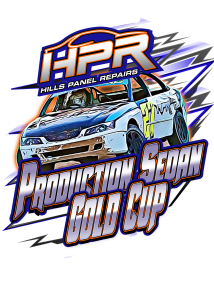 Aydan Trewern leads the Hills Panel Repairs Production Sedan Gold Cup, after night one at the Make Smoking History Bunbury Speedway, as the Albany based driver went through the night undefeated.
Nine qualifying heats were held, with Cody Blight winning the opening heat only to be relegated at the end of the race or passing on the infield, handing the win to Jake Blight. Trewern would win heat two from Barry Rose and Rickie Nuccini, before Kyle Sayer took heat three, only to be relegated by the Chief Steward at the end of the race for passing on the infield.
Clinton Theyer would lead all the way to win heat four, as did Cody Blight in winning heat five, while Graeme Rafferty would be the big mover in the race finishing second. Trewern would record his second win of the night in heat six after starting on the front row, with Jamie Higgs and Rickie Nuccini filling the minor placings.
Unlike other categories on the night, which started to dwindle in numbers, the Production Sedans started the last round of heats still with full fields.
Kyle Sayer took heat seven very convincingly, despite a late stoppage, with the Busselton based driver accounting for Cody Blight and Theyer. Heat eight saw Trewern take the honours to be top points at the end of the opening night, downing Peter Katona and Jake Blight. The last heat of the night would be won by Rickie Nuccini, but he jumped the start and with no stoppage he would be relegated at race end, handing victory to Jake Avins, with Shane Dubberlin second.
Tonight the Production Sedan drivers will endure a top eight dash to determine the first four rows on the grid, while the remaining drivers will race in two, twelve lap B Mains, with the first seven in each of those to fill positions 9-22 in the A Main. The remaining drivers will get one final chance to advance to the 30 lap main event, via a Last Chance Qualifier, where the first two will start off row twelve in the A Main.
Racing commences at 5.00pm
Production Sedans Points After Night One
1. W12 Aydan Trewern 108
2. 51 Cody Blight 87
3. 95 Kyle Sayer 82
4. 61 Jake Blight 82
5. 54 Graeme Rafferty 77
6. WA4 Clinton Theyer 72
7. 41 Rickie Nuccini 69
8. 11 Jake Avins 61
9. 181 Barry Rose 58
10. 96 Jack McAuley 51
11. 16 Peter Katona 51
12. 14 Anthony Page 48
13. 77 Possum Lawrence 47
14. 4 Jamie Higgs 46
15. 111 Tom Wilde 44
16. 13 Shane Dubberlin 43
17. 48 Matthew Jones 33
18. 26 Tyler Spalding 33
19. WA27 Nicholas Porter 31
20. 57 Kelsey Beard 31
21. WA5 Ben Pratt 29
22. 86 Wayne Leviston 27
23. 777 Myra Oborne 23
24. 8 Richie Freeman 22
25. 27 Rachel Spalding 22
26. 58 Sierra Iwanow 20
27. 30 Jamie Harris 15
28. 44 Brody Lake 10
29. 5 Josh Fraser 4
Image by Fastlane Photography.