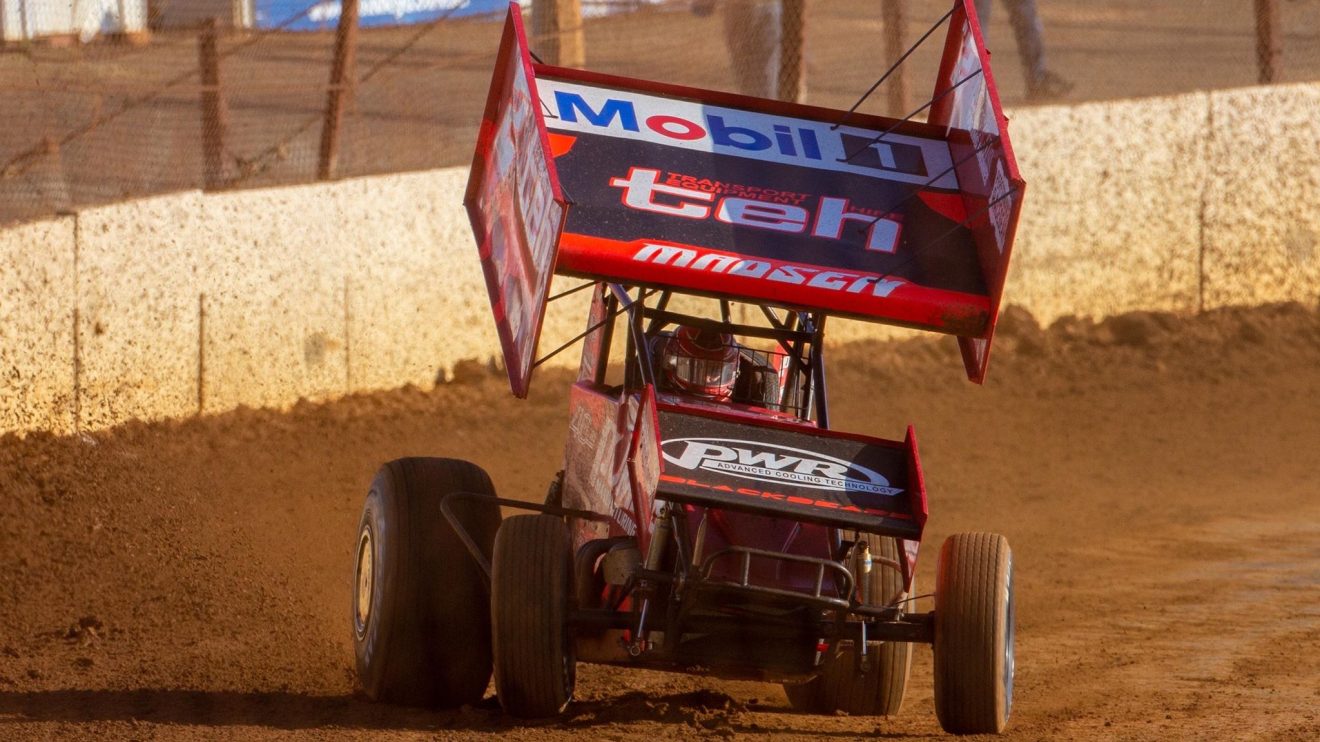 Krikke Motorsport’s Kerry Madsen has survived a last corner stab from James McFadden to take victory in round twelve of World Series Sprintcars at Bunbury Speedway.

Perth’s Jason Kendrick topped the time-sheets to claim Revolution Racegear Quicktime by just four-thousandths of a second over Madsen, while Andrew Priolo claimed an impressive 3rd quickest lap ahead of Pennsylvanian Lucas Wolfe.

McFadden qualified midfield in a disappointing 12th, forcing the Monte Motorsport pilot to work hard through the heat racing to regain points. The four-time series champion responded with a pair of heat wins to claw back into the Top 8 Shootout but didn’t advance past the first chapter, placing the #W17 Daniel Trucking entry on the fourth row, while Madsen secured pole position for the thirty-lap main event.

Madsen was dominant from the start and opened up a solid lead instantly, while second row starter Priolo mysteriously fell back eight spots in the first lap, all while Kendrick and Brooke Tatnell provided and intense battle for second.

Meanwhile Dave Murcott sliced through the field from the fourth row with McFadden in-tow to reach 4th until Glen Sutherland and the fading Andrew Priolo mildly tangled on lap ten to provide the first caution.

Tatnell pounced on the restart to momentarily steal the lead from Madsen but ran out of momentum while McFadden went directly into battle with Kendrick and Murcott and drove between them through turn three to fill 3rd spot.

Matthew Cross provided the second caution of the race, and Glen Sutherland would introduce another with only one additional lap completed.

The game-changer however occurred shortly after the restart with contact between Kris Coyle and Andrew Priolo launching the latter violently into the turn-one catch fence. Neither racer was hurt in the crash, however the extensive fence repair prompted an Open-Red situation where the field parked on the front straight and crews were afforded the opportunity for setup adjustments limited only by the option to change tyres which would result in being sent to the rear of the field.

No teams rolled the dice on rubber change, but many made extensive modifications to shocks and bars in the break, only to find out post-race that the Krikke Motorsport #W2 largely remained unchanged.

After a half-hour stoppage, the restart launched Madsen into another impressive lead and Tatnell looked solid fending off McFadden however Wolfe began his campaign in earnest displacing Murcott and Kendrick to step up to 4th before Rusty Hickman rode a right rear to dart into an awkward forward roll and crunch the turn three wall with ten laps remaining.

Another restart, and this time Tatnell ran out of favours and was passed by McFadden and then Wolfe shortly after, with the Pennsylvanian continuing his momentum to almost dislodge McFadden as well.

McFadden responded with the quickest lap of the race and with just four laps remaining, pulled out all stops to pepper away at the #W2 until the final turn where he swept around the outside to only just fall short on the finish line to trail Madsen by just seven-tenths of a second, but fend off Lucas Wolfe who finished almost 3 seconds behind in third, ahead of Tatnell and Murcott.

“I just had to be patient,” Madsen said in victory lane. “I was watching the board and caught the lappers with three to go and it was tense. James had a dabble on that last corner but I’d made my mind up to not get caught up and open up the bottom. I’ve lost a race here before doing that!”

Ironically, Madsen’s drive to the scales after the race finish was halted when the car appeared to slide into the infield barrier and broke the front end. When questioned on what happened, Madsen revealed that the front end actually started to fall apart on lap 31 and the contact with the wall on en-route to the scales was just the final component failure.

Madsen’s win now closes the gap to series leader McFadden to just 26 points, while Tatnell remains 3rd retaining a mathematical but unlikely chance to claim his tenth crown. Jock Goodyer sits 4th and maintains his “Rookie of the Year” status ahead of Lucas Wolfe by just 61 points.

The series now heads to the Perth Motorplex next Friday for the second last round before the series decider on Saturday night.