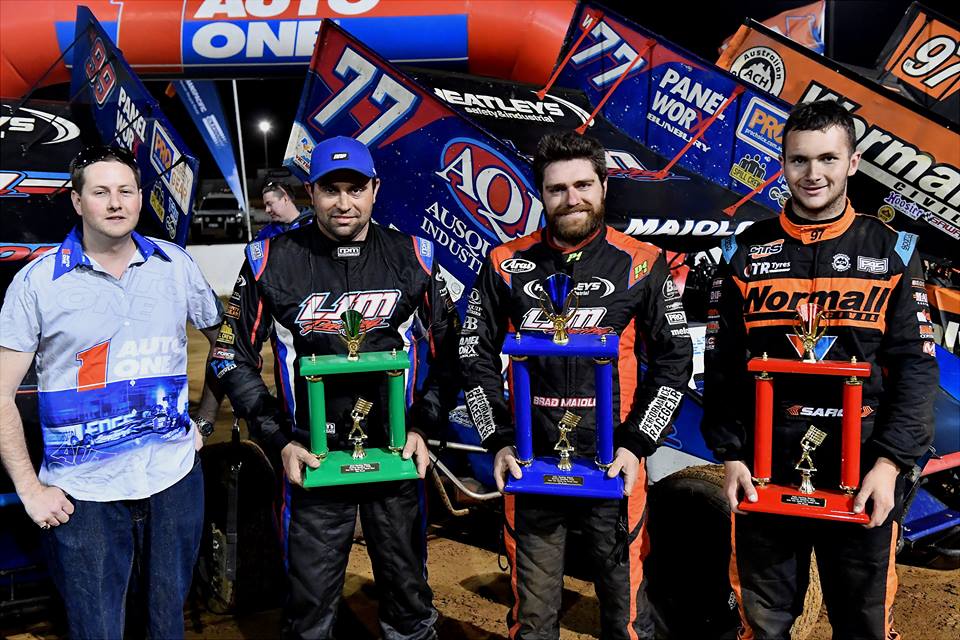 He won the 30-lap feature race from Mitchell Wormall and Jamie Maiolo in a drama-filled race that took a couple of attempts to get underway.

The first attempt saw the cautions come on when Jason Pryde spun in the first turn and restarted from the rear, albeit with a damaged front wing.

Once that was out of the way Kaiden Manders, who started from pole, had fresh air in front of him but Brad Maiolo, was the early bolter on the high line, rounding up a couple of cars in front of him.

Ben Butcher, who started from the rear of the grid, looked very strong and had pushed his way into fifth by lap six before Brad Maiolo hit the lead over Manders on lap nine.

Maiolo would lead the remaining distance but a restart with six laps to go would ignite Mitchell Wormall, who started to trade multiple blows with Jamie Maiolo before claiming second place, something he held onto until the checkers.

Ash Hounsfield returned to winners’ circle in spectacular fashion, claiming a strong feature win at the Speedway in what was round six of the Keenquip Wingless Sprint Club Championship.

Hounsfield would not be headed in the feature race after starting along the front row with team mate Chad Pittard, going on to record a strong win over Fitzgerald, Humfrey and Taylor. While Pittard would be a non-finisher after a small engine fire on lap eight.

In other events, Alec Melvin would record an exciting win in the Production Sedan Feature Race as Melvin, Wayne Leviston and Jason Oldfield crossed the finish line three abreast while Jamie Harris and Matt Kennedy would take the spoils in the Legend Cars and V8 Dirt Modified main events.