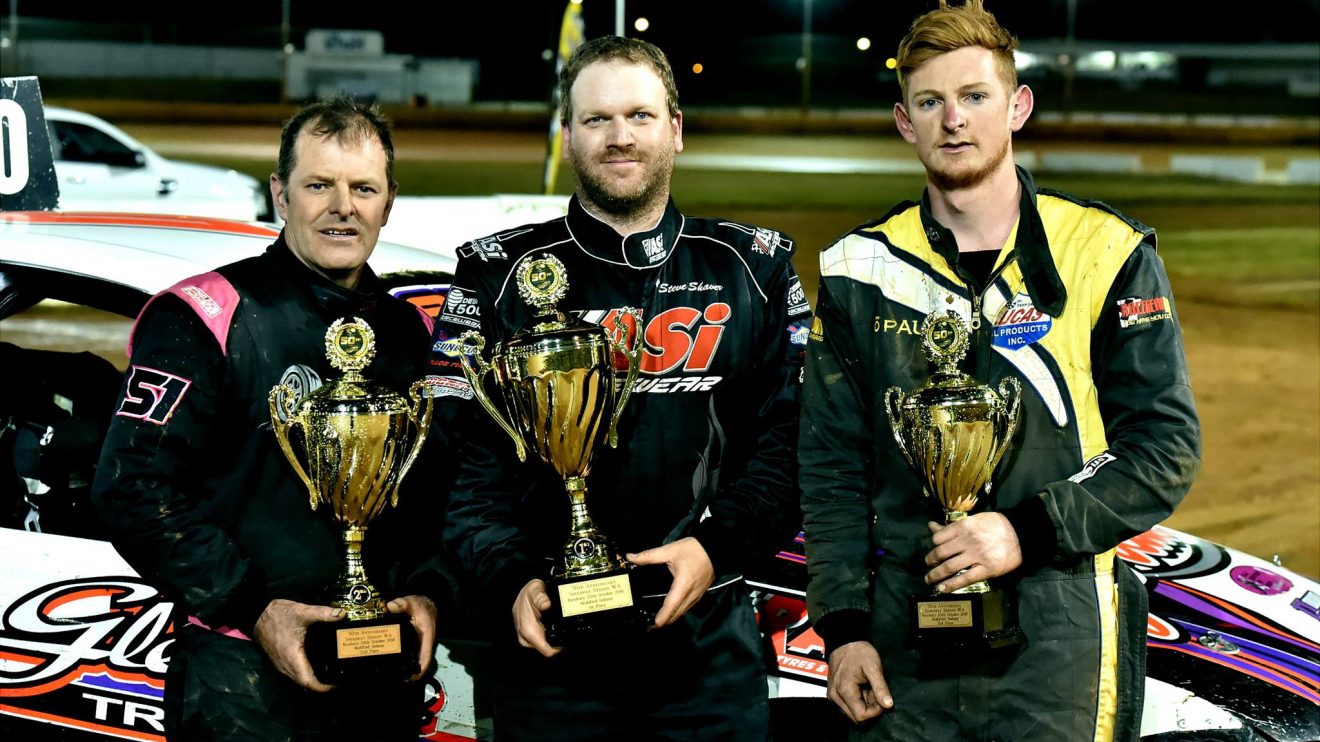 Matt Noakes has shown the form that makes him a former National and State Champion in Sedans last night at the Make Smoking History Bunbury Speedway as he claimed the Modified Sedan feature in the SSA 50th Anniversary event.

As the race went green Noakes would immediately grab the lead while Nathan Penn raced into second and Nelson third as King dropped back to fifth.

Unfortunately for Penn it would all end in tears, his early race form deserting him as mechanical issues reared their ugly head and sent him infield.

King fought back and by the end of the second lap he was back in second place while Paul Stevens, in his first event as a part of the Modified Sedan Series, raced his way into third past Nelson who would also retire a couple of laps later.

Jayden McCuish, also in his first night as a Modified Sedan struggled through the night with mechanical issues but in the feature he appeared to come good, at least temporarily as he raced his way into fifth place before suddenly slowing and heading infield.

This left Noakes leading King, Stevens and Mortimer who was moving forward at a rate of knots in the feature, closely followed by Shane Dubberlin who was having one of his career best nights. Unfortunately it also ended in tears for him, clouting the front straight wall heavily and riding it, before coming to a rest in a puff of steam and smoke.

On the restart Branden Fraser was also unable to get going and headed infield while running sixth.

From here the order never changed at the front while Adam Houston made some ground towards the back of the field, but as the flag flew it was Noakes who led every lap to win the feature from King and Stevens. Mortimer was fourth followed by Houston while Rick Musarra and Sandy Macpherson were the only other finishers.

Stevens and Musarra then found themselves coming together in turn one after the finish, with significant damage to both cars.

Last night would also double as round one of the Cranecorp WA Modified Sedan Series, with Noakes also leading that point score after the opening night, after points from the heats and feature were combined. Noakes, Nathan Penn and Anthony King (2) shared the heat wins.

A huge thanks to WAMDA and the Modified Sedan drivers for working with us to put on such an incredible event for their series and the SSA 50th Anniversary event combined.